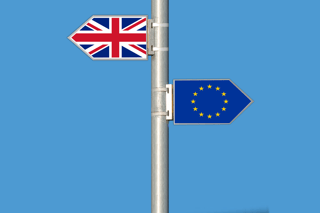 The other article argues “the immediate hit to the economy is probably even more serious than suggested” by a survey from IHS Markit and the Chartered Institute of Procurement and Supply because the survey excludes construction, which is particularly vulnerable post the Brexit vote. Also, the financial services sector in particular is affected because “It would be quite possible for the EU to impose quite tough barriers on UK service sector exports, and this is of deep concern, particularly to the City”.

Some newspapers pick up on fear. Particularly in the technology and financial services markets where there is concern of losing a skilled EU workforce who may prefer to work where their right to stay is not the subject of ongoing uncertainty and discussions.

Already large technical and financial institutions such as banks and insurance companies are reviewing their position either to reconsider their head office being in London (Vodafone) or to at least secure their position by seeking licences in the EU and in particular in Dublin (Beazley).

Despite the fact that the actual triggering of article 50 has not yet happened, it seems that Brexit already has had quite an impact. Just look at Lloyds bank and its announcement of the loss of 3000 jobs to the UK economy because the interest rates might change following the Brexit vote.

It is therefore not a surprise that corporations, as well as individuals, are considering their position and are trying to remain as agile as possible. Ultimately, remaining agile in an uncertain environment should be part of any Corporate Resilience strategy. The ability to provide the right information at the right time in the right format to all the stakeholders is key to staying on top and assessing the uncertain market as best as possible. Making informed decisions depends on reliable data being readily available and to facilitate this, it is important to make sure the right IT structure and systems are in place as working with data in silos is no longer an option in the current and future environment.

An unstable environment has now become even more uncertain, but we can be sure that there are still consequences - both positive and negative - of the Brexit vote which are yet to become clear.

The outlook for the MENA insurance market is extremely positive for 2013, with projected double digit growth. However, as ...
Start Reading
Kevin Richmond 03-Jun-2016 07:57:23 9 min read

Not a day goes by without another expression of strongly held views in the media.  With engagement from people on both sides of ...
Start Reading
Kevin Richmond 25-Apr-2017 15:51:45 7 min read

It is no secret that the traditional (re)insurance firms have a reputation of reluctance to adopt and adapt to new ...
Start Reading