The key impetus behind this regulatory change being to strengthen market integrity via raising the standards of conduct for everyone who works in financial services In turn, this makes senior people in these firms more responsible and accountable for their conduct, actions and competence.  The forthcoming SMCR will impact around 47,000 companies.

Before delving into the broader ranging implications of what this means in practice for the firms in scope, let’s first revisit the main aspects of SMCR’s regulatory framework.

SMCR was introduced in March 2016 for banks, building societies and PRA designated investment firms.  It was following the financial crisis of 2007-8 against a backdrop of rogue trading and Libor rate-fixing scandals in the financial industry.  Senior directors and heads of trading desks claimed to have no knowledge of these scandals (and largely escaped culpability in relation to) the dubious trading activities of their subordinates, whilst simultaneously encouraging a culture of short-term profit making at any cost. Like many financial meltdowns of previous eras; wrongdoing was followed by a period of regulatory enforcement, a kind of reactionary antidote to try and prevent a repeat of the ills of the past.  SMCR is no different, and was introduced to increase accountability, especially of senior personnel, across the financial services industry.

Core to the SMCR are the three main elements summarised below:

The diagram below illustrates the timeline for compliance with SMCR: 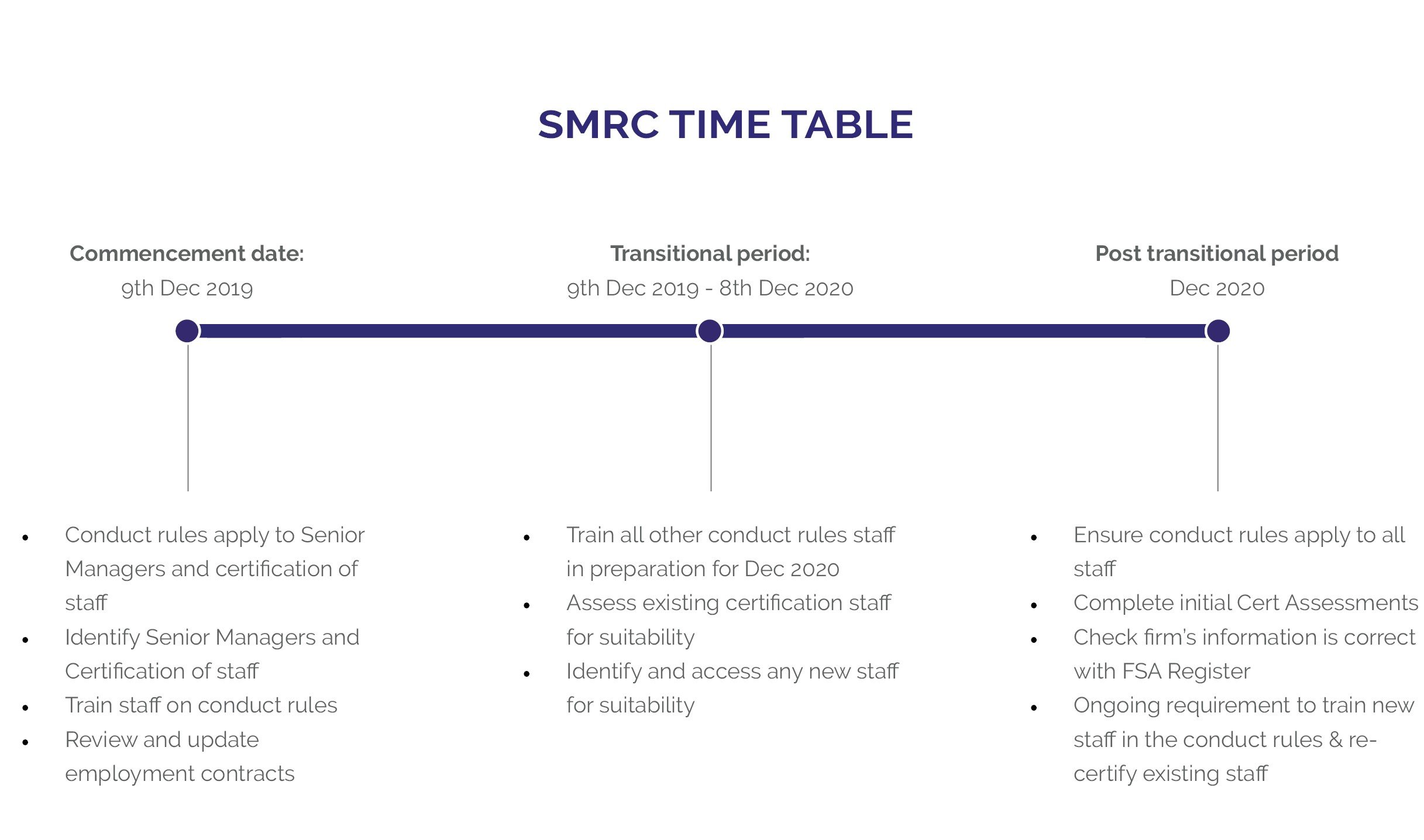 So, what are the wider implications of the SMCR for firms and individuals within the financial services industry?  As it did in the banking world, the roll-out of the SMCR is likely to have a substantial impact on the market and firms in scope, including the employer/employee relationship and HR processes of such firms.  Material changes to the risks of those individuals working in the most senior roles, annual “fit and proper” appraisals for certified staff and the imposition of a new code of conduct for all staff with direct recourse to the FCA in the event of breach arguably represents a substantial change to firms and individuals alike.

On cultural reform, it is expected there will be a significant change in tone and ownership from Senior Managers, with an increase in clarity of thought around cultural expectations within the relevant firm.

What would it be like if such an accountability regime was implemented in the world of politics, I wonder?

The loosening of the regulatory noose…

Increasing pressure from regulatory bodies, in addition to the need for stronger MIS and balance sheet control is driving a ...
Start Reading