Single Dealer Platforms – Where Are We Heading?

Pushing the Boundaries  of Trading Technology

The modern era of FX trading is widely recognised as beginning with FX Connect, launched by State Street in 1996 to replace voice trading with customers - The first single dealer platform (SDP). FX Connect made FX trading more efficient and considerably reduced operational risk. The launch of FX Connect heralded an unprecedented period of change in the FX market, notably the advent of multi-dealer platforms (MDP), which started with the launch of Currenex in 1999. FX Connect became an MBP in 2000, and these two pioneers are now part of the State Street stable.

Pioneers attracted by disruption and opportunity changed the dealer-client landscape dramatically, driving electronic trading market share from 2% in 1993 to 20% by 2001. The FX market continued to grow significantly between 2000 and 2010 (see table below) in terms of volume and participants. The proliferation of electronic trading platforms led to new types of brokerages and the rise in retail participation.

This rapid development prompted the major banks to respond to the new competition by creating FXall, which became the major MDP at the time. Some early adopters followed the State Street example to develop SDPs such as Dresdner Piranha in 1999, UBS FX Trader in 2000, Barclays BARX in 2001 and Deutsche Bank's Autobahn (following on from the 1996 platform for US treasuries) in 2002. Goldman Sachs launched their platform in 2003, and Citi followed in 2006.

This significant investment in electronic trading heralded a couple of decades of growth in FX markets as measured by the authoritative BIS survey. 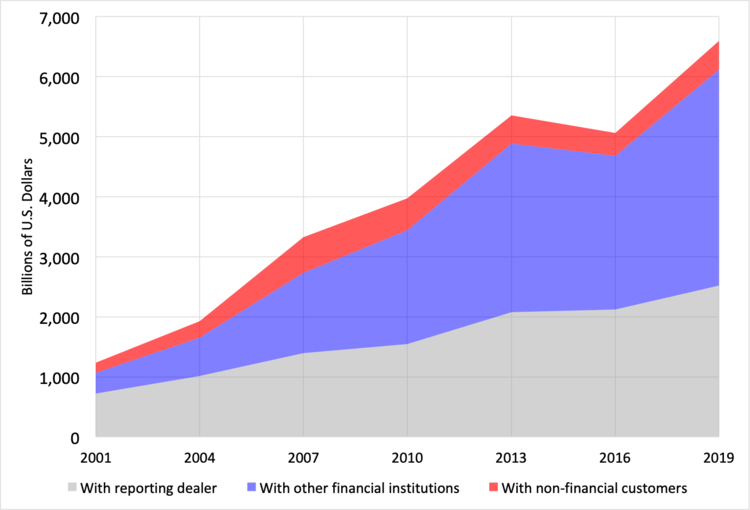 King of the Castle

The advent of MDPs gave the buy-side unprecedented access to aggregated liquidity. It was a general belief that buy-side customers would achieve greater efficiency by getting simultaneous quotes from multiple dealers in competition with each other. Asset managers found that they could achieve efficiencies from the ability to electronically trade block-trades with post-trade automated allocations. Additional benefits were realised when the MDP was connected to their portfolio management system (PMS) for straight-through processing (STP). Corporates also saw the advantages of moving away from voice trading, which required getting several banks on the phone at the same time to discover the best price.

When the early SDPs launched, they proved to be much more popular than most commentators expected, surprising even the banks themselves. The end users voted with their feet, and this revealed that aggregation of quotes from multiple banks was not the primary factor when deciding how to execute electronically. The Bank of England Semi-Annual FX Turnover Survey in 2009 showed that 25% of turnover was going through SDPs, about twice the volume of the MDPs.

By the 2020s, all this has ultimately led to FX execution's highly fragmented and complex landscape.

The Current State of Play.

A Reversal of Fortunes.

“The 2019 Triennial Survey shows that trade execution has undergone rapid change, with more diverse participants, new technologies and increasing complexity. Electronification advanced the fastest in dealer-to-customer trading. Dealers and customers navigated a highly fragmented market by leveraging technology to trade across electronic venues. Aspects of FX intermediation tilted more towards non-banks as new market-makers, albeit brokered by top dealers. Bank dealers continued to attract large flows to their own proprietary liquidity pools. Consequently, even though the market grew bigger as a whole, the share of trading activity 'visible' to the broader market declined.”

As volumes increased, the share of the interbank market declined by 7% between 2016 and 2019. This phenomenon has been caused by the more significant liquidity providers warehousing risk until an offsetting customer flow defeases it. This internalisation has fundamentally changed the FX landscape and prompted interbank platforms to extend their reach to counteract the declining volumes. On the other hand, dealer-to-customer markets have continued to boom, with 75% of spot FX now transacted electronically, and SDPs have continued to develop boosted by NDFs and emerging market trading in particular.

The only fly in the ointment for SDPs is the latest figures showing a fightback by the MDPs. This reversal may have been prompted by more attention to best execution, along with the growth of anonymous dealing. Also, recent developments such as the advent of the FX Global Code (see below - ) may have had an influence. The graph below, ‘Electronic trading, dealer-customer segment2’ from the BIS paper, illustrates the extent of the reversal of fortunes for the SDPs. (BIS data illustration:  To differentiate between the MDPs and SDPs, the terms electronic direct and indirect share are used.) 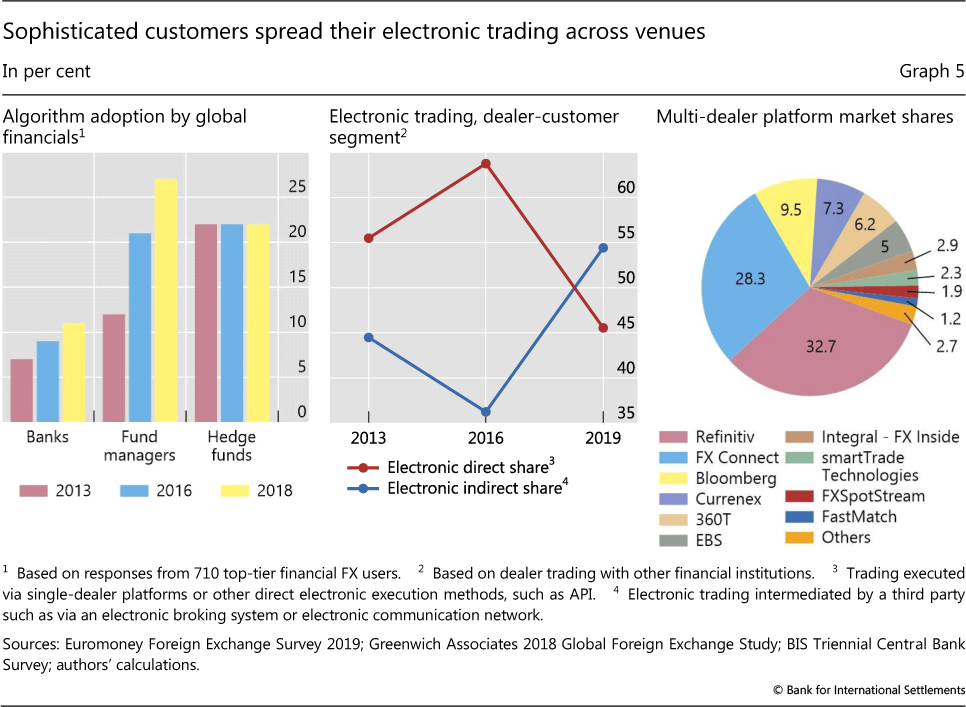 Rules of the Road

The FX Global Code (FXGC) released in August 2018 and subsequently updated in 2021, has had an influence on the shape and development of SDPs. One area where this has manifested originated in the early part of the new millennium when the electronic market introduced a concept known as “last look”.

Last look is a risk mechanism that allows a market participant who has received a trade request a final opportunity to check credit, price and validity without delay before accepting the trade. It can also prevent ‘stale’ trades from being accepted if the message or system integrity is unstable or excess latency has been introduced into the trading process.

This controversial feature of electronic trading has resulted in legal cases, much debate, and clear divides over its acceptability. This may have prompted some customers to revert to MDPs which can give neutral statistics about the customer's last look hold times by multiple liquidity providers and allow for business to be directed to those that have lower hold times and fewer rejected trades. However, equally, the GFXC has called for more granular and uniform disclosure. If liquidity providers can agree on matters, such as reject “rejection codes” and definitions, customers will be able to easily compare SDP’s use of last look, and we could see business drift back in their direction.

As noted in the outcomes of the three-year review, the GFXC states:

Areas of Growth for SDPs

It is possible that market fragmentation is beginning to slow as recent shocks to the market have shown the value of direct relationships, and SDPs are responding to this in earnest. Many are offering Algo execution for sophisticated customers along with market-neutral Total Cost Analysis (TCA). Algos are allowing customers to accept more market risk for the trade-off of less market impact for larger orders. SDPs score very well in this regard by offering proprietary algos that are discreetly handled and executed via multiple liquidity pools, and the bank’s own internalised liquidity. Coupled with the above guidance from the GFXC, we may well see increased confidence returning in SDPs.

We are also beginning to see the gradual emergence of true cross-asset platforms rather than various platforms cobbled together via one access point. This development is starting to pave the way for FX execution to be more seamlessly embedded with other workflows and open the door to other offerings embedded into the cross-asset platform. With the increased electronification of NDFs and emerging currencies, this bodes well for the future SDP.

The effect of the pandemic has been a mixed bag for many involved in the FX market. The increase in volatility has been seen as a boost to trading activities. On the other hand, with banks splitting personnel between the office, disaster recovery sites and working from home, issues have arisen that will spur SDP’s technological development. Automation has been critical, and strategically deploying an unified trading and sales platform has demonstrated the value of an SDP both internally and externally.

Equally, we are seeing the ever-increasing electronification of emerging markets, and in some quarters, the dominance of a handful of large liquidity providers is seen as a systemic risk when these major liquidity providers become the primary liquidity pool. We can expect that encouragement will be given for local banks in these emerging markets to offer better pricing and deeper liquidity in their local currencies rather than their international competitors dominating. Initiatives such as that by the Bank of Jamaica to encourage a local electronic market is a good example. As they stated in their May 2020 press release –

“Bank of Jamaica’s (BOJ’s) ongoing reform of the foreign exchange (FX) market is poised to take another significant step. The long-awaited electronic FX Trading Platform (FXTP) is almost here. The platform will facilitate real-time electronic FX trading and observation of trades between all authorised FX traders - namely Deposit Taking Institutions (DTI’s), and cambios for the USD/JMD currency pair.” “The signing of the BIS FX Global Code adds credibility and holds those dealers to a global standard of integrity, efficiency and good customer service. The FXTP is expected to further upgrade the FX market by adding even greater layers of efficiency and transparency.”

From now on, we can expect SDPs to build on new, improved pre-execution and post-trade expertise alongside more banks deploying this important bank-to-customer functionality, and cloud deployment may well open up a world of opportunity in providing “as a service” features. Indeed, the 2022 BIS survey will make fascinating reading as to how these trends are developing. We may well even see a return to utility-style models with groups of regional banks or a collection of saving banks banding together to enable cost-effective developments to compete with those with larger budgets. We could even see some of these built on a central dealer structure to streamline customer access to deeper liquidity. Meanwhile, those banks relying on white-label solutions may well see that a differentiated offering that is cloud-deployed is more elegant and helps preserve them as the last mile in their customers’ access to the market. 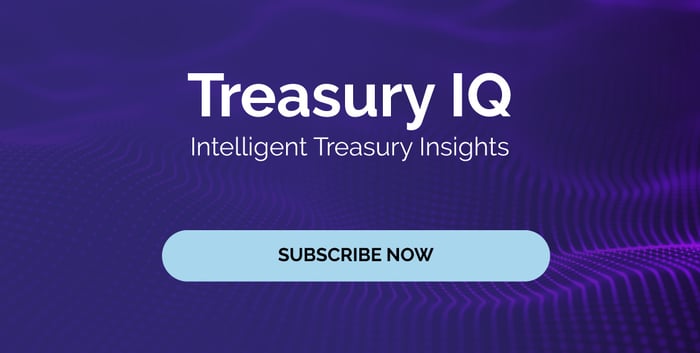 What Are You Reading on The Beach This Summer? The Eurobase Summer Reading List.