Full steam ahead ordered on IBOR replacement and the FRTB engines are being stoked…..

In November last year we held a Breakfast Briefing entitled “New Horizons for Treasury Regulation”, two of the topics we covered were IBOR reforms especially from the legal aspects and the Fundamental Review of the Trading Book and predicted these would come centre stage in 2019.

As we approach the half-year mark, this was certainly prescient with many column inches dedicated to both subjects. Replacement of IBORs is probably the biggest and most dangerous challenge the financial system is facing between now and 2022. Well-rehearsed arguments are being played out daily as to how fundamental the drive to replace IBORs with Risk Free Rates (RFRs) is and how colossally dangerous this could prove to be. IBORs are deeply embedded in the global markets and financial systems as well as in regulation particularly in cost of capital calculations including an impact in terms of the Fundamental Review of the Trading Book (FRTB). More on that below!

Our decision to lead on the legal aspect of LIBOR reform was down to the fact that LIBOR transition is the largest risk and that ISDA agreements are based on English law. Other IBORs have similar issues to LIBOR. The effects of the potential total discontinuation of LIBOR will be felt far beyond our shores given the global nature of our markets. I was not surprised to see comments made by Michael Held, executive vice president and general counsel of the Federal Reserve Bank of New York sounding like something from a Cold War major crisis. He stated, in the context of legacy contracts that legal risk “is a DEFCON 1 litigation event if I’ve ever seen one.”

With the legal risk mainly being with legacy instruments that do not have robust fallback language we are assuming new contracts will have taken care of the probable discontinuation of LIBOR. Certainly, industry groups such as ISDA and AFME on the Financial Institutional side and Associations of Corporate Treasurers for corporates are doing a great job of promoting awareness and publishing mechanisms to deal with the issue going forward. But and it is a big BUT, on the legacy side we cannot just rely on these sweeping agreements as the contracts already exist in law and are bilateral between two trading counterparties. Further complications abound in bond and securitisation issues in which all the multiple parties must agree to an amendment to the legal agreement.

None of the RFRs are exact economic replacements to LIBOR given the credit risk element, among other factors, so we will have winners and losers. In addition, if an asset or liability holder agrees an adjustment that differs to a derivative solution it will play havoc with hedges. We hope it will be all right on the night but as Held states in his speech “I’m optimistic that we can get there. But, as Tim Geithner liked to say, hope is not a plan.” With legal principles such as the Doctrine of Frustration at play in which a contract can be voided and all payments reverted the legal risks are paramount.

So, with the Federal Reserve and the Bank of England re-emphasising their emphatic stance that LIBOR will be phased out, with January 2022 the date from which compulsion to submit ends, the BIS is equally emphatic that the FRTB will also take effect at exactly the same time. Given Market Experts generally agree that it will take two years to test and get model approval, it is essential that planning is taking place now. Decisions need to be taken regarding the Standardised or Internal Model approach on a desk-by-desk basis. Once that exercise is complete, the process to get approval for Internal Models needs to be executed. Read our FRTB white paper for more on this topic.

The two fundamental issues of LIBOR and FRTB are also interconnected. As I observed in my piece entitled “LIBOR – Living on Borrowed Time” – “The impact also goes further; banks that model their own requirements under the Fundamental Review of the Trading Book (FRTB) are asking regulators for some relief as liquidity in LIBOR-based swaps diminishes and liquidity builds up in replacement benchmarks.” I am sure we will be returning to these subjects in H2 as we assist in steering the ship clear of the jagged rocks ahead!

FRTB - A Fundamental Change to Your Trading Business 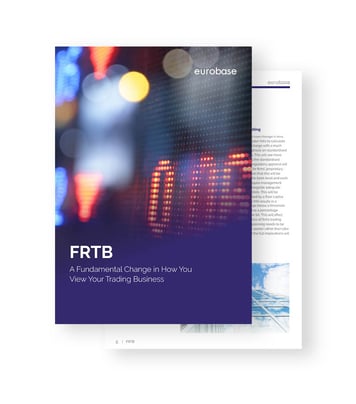 Starting the New Year with a call to arms!

Regulatory Reporting and FX Swaps. Or is it FX Strats? Or even FX Packages?!

We have been seeing a lot of discussion and interest concerning a blog I penned in March last year  under the title of “Beware ...
Start Reading
David Woolcock 20-Jul-2020 11:16:02 18 min read

Back aboard LIBOR Reform – full steam ahead in the UK.

A triumvirate of the Working Group on Risk-Free Reference Rates (RFRWG), the FCA and the Bank of England published joint ...
Start Reading