Down in the crypt - a Halloween spook sends shivers down some spines!

The UK’s Cryptoassets Taskforce is comprised of HM Treasury, the FCA and the Bank of England. Not to be likened to the three witches from Macbeth who are often thought about at this time of year!! Just in time for Halloween, they have published a Final Report that sets the scene for the Cryptoassets, Blockchain and Distributed Ledger Technology (DLT) sector in the UK from a policy and regulatory perspective.

The report notes the lead that the UK has in the exciting DLT addition to the infrastructure in the financial markets. “The UK is an emerging leader in the development of DLT. The UK has the second largest number of DLT start-ups in the world, following the United States. London also has the second highest number of DLT projects listed on code repository GitHub, just behind San Francisco”.

However, for the Cryptoassets arena it is more peering into the mists or as Banquo in Macbeth observed “If you can look into the seeds of time, and say which grain will grow, and which will not, speak.” Or as the report states, in a less spooky way: “There is limited evidence of the current generation of cryptoassets delivering benefits, but this is a rapidly developing market and benefits may arise in the future. There are substantial potential risks associated with cryptoassets, and the most immediate priorities for the authorities are to mitigate the risks to consumers and market integrity, and prevent the use of cryptoassets for illicit activity.”

Notwithstanding the noted risks, the authorities are determined that the UK will be at the front of the grid and will continue to support the development of suitable uses of the new technology. Consideration of the Bank of England’s proposals for the RTGS system through to the participants in the FCA’s various sandbox cohorts is prompting Financial Institutions and Banks to swell the ranks of the Fintechs in embracing these new opportunities.

In keeping with the Halloween season, there is one spook in the detail for the Retail FX industry that has been active in the cryptocurrency markets. In a robust warning the report notes: “Given concerns identified around consumer protection and market integrity in these markets, the FCA will consult on a prohibition of the sale to retail consumers of all derivatives referencing exchange tokens such as Bitcoin, including CFDs, futures, options and transferable securities.”

That will send a shiver down the spine of Retail brokers active in the space. This is truly a “Nightmare on Retail Street” given that many had restored profitability through the appeal to their customers of cryptocurrency trading.

In keeping with Macbeth’s witches, “When shall we three meet again in thunder, lightning, or in rain?” the Taskforce will meet every 6 months to keep abreast of this most dynamic of developments and not “When the hurly-burly's done, when the battle's lost and won.” The UK is well poised to benefit from this “evolve and innovate” approach.

For us it is essential to keep on top of this witch’s brew and throw in the cauldron the needed components (with a Nod to the Bard):

Fillet of a Blockchain,
In the cauldron boil and bake;
Distributed Ledger Technology,
Initial Coin Offering,
Bitcoins's fork and cryptocurrencies sting,
Regulatory leg and innovation’s wing,
For a charm of powerful trouble,
Like a hell-broth boil and bubble.

Cool it with a rational head,
Then the charm is firm and good.”

To sample the rich brew of this charm with a rational viewpoint join us for breakfast in November when a Crypto expert and CEO of an Institutional offering will share with us the secrets of the alchemy in this brave new world of cryptocurrencies. 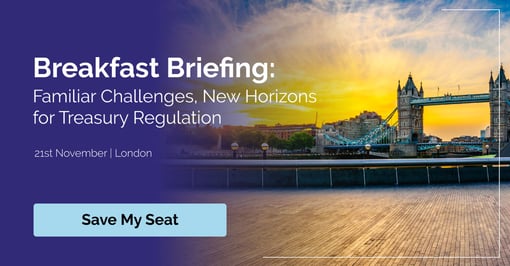